Conference “Keeping the Russians out, or in ?”

Home Pôles Etudes Conference “Keeping the Russians out, or in ?” 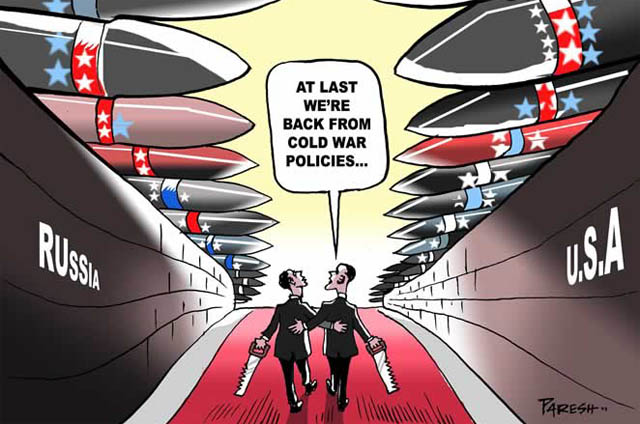 Conference “Keeping the Russians out, or in ?”

February 20th Next Generation Foreign Policy Network, the ANAJ-IHEDN team based in Washington DC is pleased to welcome you to our next conference on :

Keeping the Russians out, or in?
The evolving state of U.S.-Europe-Russia affairs

Paul FRITCH
Former Director of the Office of the Secretary General of the OSCE
U.S. Department of State

After years of seeking to garner greater Russian support on a host of issues of import to the United States, from Afghanistan to Syria, from non-proliferation to counter-terrorism, and after the “reset” failed to deliver on its promise, some experts argue it is necessary to focus on core issues to advance U.S.-Russia ties.

While Washington has gradually focused less on Russian concerns in the Euro-Atlantic sphere, Moscow’s willingness to cooperate with the United States in other areas has declined as well.

To reverse this trend, could the answer be a return to fundamental issues and taking Russian concerns seriously ?
To assess the current state of U.S.-Russia ties in the Euro-Atlantic space, and identify productive ways forward, the NextGen Foreign Policy Network is pleased to invite you to a discussion with leading thinkers and diplomats on U.S.-Russia relations. The event will be followed by a short cocktail reception.

He is the deputy director of the Russia and Eurasia Program at the Carnegie Endowment. An expert on U.S. and Russian national security and nuclear-weapon policies, his work focuses on relations among the United States, NATO, and the states of the former Soviet Union. Additionally, he is responsible for Carnegie’s Ukraine Program and analysis of politics and security in Eastern Europe, including Belarus and Moldova.
He is also an adjunct professor at American University in Washington, DC, and a participant in the Dartmouth Dialogues, a track-two U.S.-Russian conflict resolution initiative begun in 1960.

About Paul Fritch
He works for the State Department, which he recently rejoined after years working at the highest levels of international organizations such as the North Atlantic Treaty Organization (NATO) and the Organization for Security and Cooperation in Europe (OSCE). Most recently, he was the director of the Office of the Secretary General of the OSCE in Vienna. Prior to that, from 2003-2007 he served as Head of the Russia and Ukraine Relations Section of the NATO International Secretariat’s Political Affairs and Security Policy Division. He joined the Foreign Service in 1991.

About Anita Friedt
She is the Principal Deputy Assistant Secretary for Nuclear and Strategic Policy in the Bureau of Arms Control, Verification and Compliance (AVC). Prior to joining the AVC Bureau, Ms. Friedt served as the Director of the Office of Policy and Regional Affairs in the Bureau of European and Eurasian Affairs and as the Director for Arms Control and Nonproliferation at the National Security Council from 2009-2011.

About Next Generation Foreign Policy Network (NextGen FPN) – US Branch of ANAJ-IHEDN
Come sink your teeth in meaty foreign policy discussions, and enjoy savory real-life anecdotes and refreshing perspectives on key international issues of today and tomorrow !
NextGen FPN is a new association in Washington, DC. It is the DC branch of the ANAJ-IHEDN (http://www.anaj-ihedn.org/english/), the only national association of young professionals in France focused on global defense and foreign policy issues.
NextGen FPN aims to bring together young leaders to raise their awareness of defense and national security issues, to help foster a better understanding of key challenges across cultures and nations, and to participate in fun, dynamic exchanges with distinguished and experienced speakers.

How to go there
From Dupont Circle : Georgetown University Transportation Shuttle, or Bus D6
For other options, check this LINK